ESCB – Eurosystem: what is the difference?

The Maastricht Treaty provides for all the countries of the European Union (EU) to adopt the single currency. The authors of the Treaty used the expression "European System of Central Banks" (ESCB) to refer to the European Central Bank (ECB) and all the national central banks (NCBs) of the EU, thereby implying that all EU Member States would adopt the euro over time.

Hence, a distinction is made between: 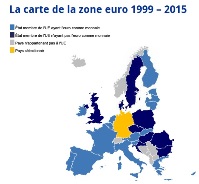