END_OF_DOCUMENT_TOKEN_TO_BE_REPLACED

For the fourth year, the Banque centrale du Luxembourg (BCL), in partnership with the European Central Bank (ECB) and a dozen other national central banks of the euro area, organises the Eurosystem’s “Generation €uro Students’ Award” high school competition. The BCL has already circulated the teachers’ booklet and the promotional poster to Luxembourg high schools through the Ministry of National Education.

The “Generation €uro” competition targets students aged 16 to 19 attending the last years of high school and, more specifically in Luxembourg, students of 2nd or 12th classes studying economics. Students have to team up with classmates to form groups of 3 to 5 students coached by a teacher.

Registrations need to be filled in on the website of the competition: www.generationeuro.eu (“Luxembourg” page). Once registered, teams will be able to take part in the first round, an online quiz of 30 questions accessible on the competition’s website until 18 November 2016. The teams reaching the highest scores in the first round will be qualified for the second round, an assignment in which they will be asked to take a monetary policy decision based on the analysis of the economic and monetary situation of the euro area, which will have to be submitted by 18 January 2017. The three best teams of the second round will be invited to the finals, at the beginning of March 2017, during which they will have to present a new monetary policy decision before a jury of experts from the BCL and answer questions from the jury.

All students taking part in the final will be awarded a prize and a certificate. Three internships of a duration of three weeks each will also be offered to finalists. Last, but not least, the team ranking first will win a two-day trip to Frankfurt, in order to attend the European award event along with the winning teams of the other participating countries.

For the first time, the information session on the “Generation €uro” competition will be hosted by the winning high school of the previous year’s contest, the Lycée technique de Lallange (Boulevard Hubert Clément - L-4064 Esch-sur-Alzette). This session will take place on Tuesday, 11 October at 3 p.m. In order to ensure a smooth organisation of the event, teachers and students interested in attending this meeting should register by sending an email to generationeuro@bcl.lu before Friday, 7 October. Should you be unavailable for this meeting, but nevertheless interested in receiving information on the competition, do not hesitate to contact the organising team at the same email address no later than 15 October 2016.

More information on the competition is available on the Luxembourg page of the www.generationeuro.eu website as well as on request by email: generationeuro@bcl.lu. 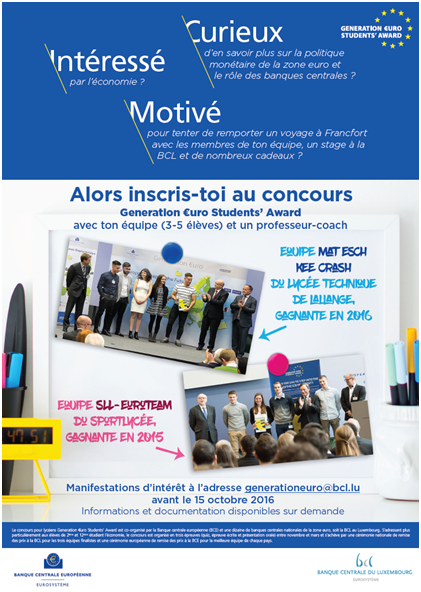