END_OF_DOCUMENT_TOKEN_TO_BE_REPLACED

The Banque centrale du Luxembourg (BCL) and STATEC inform that the current account of the first three quarters of 2015 has resulted in a surplus of 2.22 billion euros, compared to 2.52 billion in the same period of the previous year, which corresponds to a decrease of the current account surplus of 295 million euros. The trade deficit on goods (including international merchanting and non-monetary gold) has risen from 350 to 472 million euros. The balance of international trade in services has improved by almost 1.6 billion euros, from 12.8 billion euros to 14.4 billion, equivalent to an increase of over 12%. Nevertheless, this significant boost in the balance of services between the three first quarters of 2014 and 2015 has been unable to offset the growing deficit caused by the three other partial balances, especially that of the primary income, which has increased by more than 1.7 billion euros.

Detailed statistical tables are available on BCL’s website (www.bcl.lu) as well as on the website of STATEC (www.statistiques.lu).

Table: Balance of payments of Luxembourg (in millions of euros) 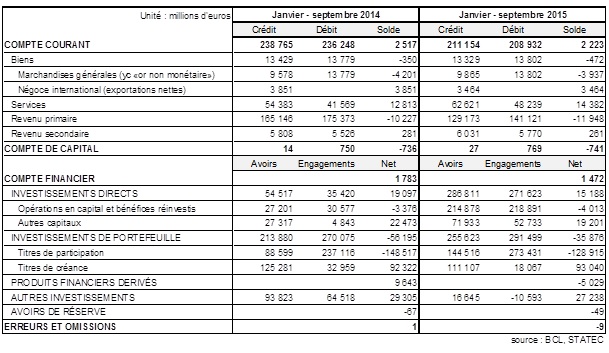